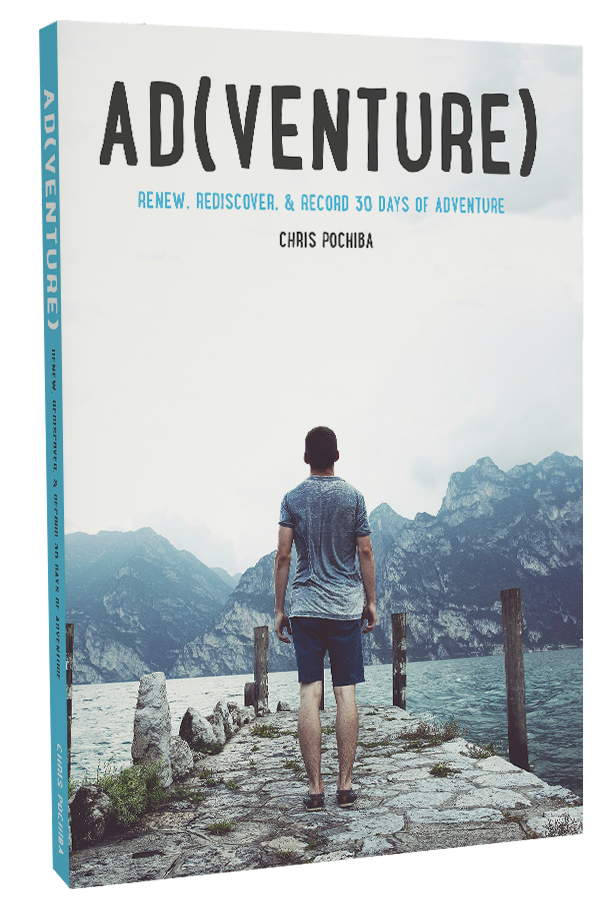 ARE YOU READY FOR AN ADVENTURE?

The indispensable guide for artists, activists, dreamers, adults, and children of all ages.

A 30 day companion to the documentary, AD(VENTURE), this book is an interactive guide for creating and documenting the perfect adventure. By the end of the 30 day process you’ll learn how to:

A 30 day companion to the documentary, AD(VENTURE), this book is an interactive guide for creating and documenting the perfect adventure. By the end of this 30 day process,  you will live a more adventurous life . This is an indispensable guide for artists, activists, dreamers, and children of all ages. AD(VENTURE): Renew, Rediscover, & Record 30 Days of Adventure will encourage readers to be come adventurous of their everyday life, chronicling the possibilities to be brave in their new endeavors.

“Many people talk about adventure. Chris is adventure. The way he lives his life not only provides adventure for himself, but it spills all over anyone around him!!!”

“A refreshing and encouraging book on how to go on an adventure, but also how to live! Chris’ words, stories, and steps in this book inspire you to want more out of life”

Inspired by such films as The Way and The Secret Life of Walter Mitty, AD(VENTURE) follows fifteen strangers as they travel across America willfully into the unknown. Directed by Chris Pochiba, and filmed during the summer of 2014, Who We Are showcases the struggles and joys of physically sacrificing for others.

AD(VENTURE) offers a rare glimpse into the life of a Venture Expeditions cyclist, capturing the energy of riding on a dangerous highway; and in the end, it portrays a journey that is both intimate and epic.

Mapped out from Seattle to New York City, the tour chronicled in AD(VENTURE) kicks off in Seattle, where the team
first meets. They have to learn to ride as a team, climb the Cascade Mountains, and face the dangerous weather conditions of the Pacific Northwest.

Throughout their excursions around the country, the team shares with different communities the reason why they are riding is to raise awareness for Burmese refugees. The team radiates a sense of a joyful community that is intensely uplifting.

AD(VENTURE) is ultimately a soul-stirring look at a once-in-a-lifetime adventure, addressing the daunting question of who we really are as human beings.